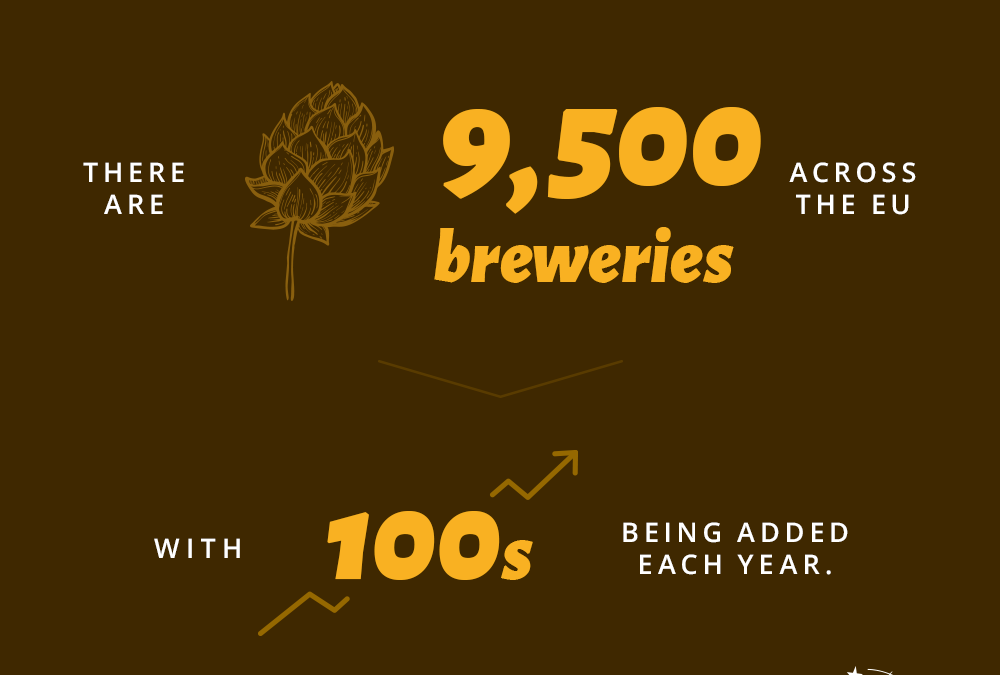 BRUSSELS 4 December 2018. Europe’s beer production rose to an eight-year high in 2017 bolstered by record exports, a rise in micro-breweries and increased low-alcohol products.

According to The Brewers of Europe’s latest report on Europe’s beer sector, production increased by 2 million HL 39.6 billion litres and exports reached an all-time high. Now one in five beers is shipped abroad, a third of that to outside the EU.

With a production of 9.3 billion litres Germany was the top producer – one in every five beers produced in the EU originates from Germany, followed by the United Kingdom and Poland (both at 4 billion litres produced, each representing 10% of the total). German and Belgian breweries exported the most beer outside their countries, 1.5 billion litres each.

In addition, the EU now produces nearly 900 million litres of non-alcoholic* beer (2% of all beer) each year, according to the data collected by Eurostat for 2017, whilst production of lower alcohol beers is also growing. This, coupled with the rise in the number of microbrewers and SMEs over the past year, shows how consumer demand is evolving and how the sector is diversifying to meet it. Around 3 quarters of the 9,500 breweries are SMEs, with the United Kingdom alone now accounting for 2,430 breweries, many of which are smaller producers.

Speaking at the 8th annual Beer Serves Europe launch event today, Pierre-Olivier Bergeron, Secretary-General of The Brewers of Europe said “Beer forms an integral part of our culture and has been enjoyed in communities across Europe for several thousand years. The brewing sector is a fundamental element of the European economy, combining local traditions with innovation. The diversification of the sector benefits many areas of the economy: in competitiveness, trade, job creation and innovation.”

Of the 9,500 breweries, about three-quarters are microbrewers and SMEs, driving for ever greater diversity and choice now available for Europe’s beer consumers. With 2,430 breweries, the United Kingdom has the highest number of breweries in the EU, followed by Germany (1,492), France (1,100), Italy (868) and Spain (521).

It is interesting to note that the increase in beer consumption over the last four years (though still a way off the levels prior to the global economic crisis in 2008) has coincided with a drop in overall alcohol consumption, binge drinking and adolescent drinking.

This demonstrates that a shift towards beer, a typically low alcohol beverage, coupled with the increased availability of even lower alcohol and non-alcoholic beers, is compatible with and maybe even contributing to the improved consumption patterns of Europe’s ever more health-conscious citizens.

Leading by example, Brewers are also committed to transparency so consumers can make informed choices about their beer. By the end of this year, two-thirds of Europe’s beer will be labelling ingredients and over half will be voluntarily labelling calories in the same way that other food and drink products already have to do. Our commitment to voluntarily provide understandable, recognisable, comparable and accurate consumer information is just one of the 100+ responsibility commitments made by Europe’s brewers under the Beer Pledge. This pledge is our 6-year strong commitment to support EU Member States reduce alcohol-related harm.

A 2018 Reputation Institute survey of over 10,000 Europeans of legal drinking age in 12 countries found that nearly half are making moderate alcohol consumption part of their lifestyle or culture and now recognise the innovative low- and no-alcohol options offered by brewers.

Europe’s brewers call for a sustainable tax regime that recognises beer’s positive impact throughout the value chain, from ‘grain to glass’. Throughout the value chain, our 9,500 breweries generate around 2.3 million jobs in Europe. Governments across the EU raise nearly €42 billion in tax revenues generated by brewing, including €10.9 billion in excise duties on beer.

As one of Europe’s premier cultural exports, beer is enjoyed around the world – supporting the sector and creating jobs at home. Many member states have increased their exports, now 8.7 billion litres of beer brewed within the EU is shipped abroad.